With so much unfortunate news about gunmen and mass attacks, both in the United States and in Europe, we’d like to remind our clients and their employees of the most basics of strategies when confronted with a gunman. While this may seem a uniquely USA-based problem, it is unfortunately not. 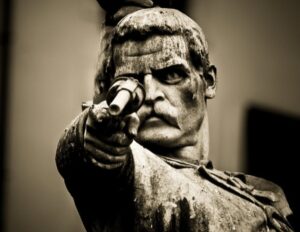 For example, on March 23, 2018, in a Super U supermarket in the town of Trebes, in the southern province of Aude in France, a gunman entered the supermarket and witnesses reported gunshots. Three persons were killed, according to news reports, bringing to more than 240 the number of people killed in France by the adherents of the Islamic State. This follows, of course, recent tragedies in the United States, among them the school shooting in Parkland Florida, where 17 were slain.

#1: Run. If at all possible and if it seems safe, run. Evacuate the building and flee to safety. The worst thing to do in the chaos is to freeze and stop thinking. Before hand, keep an eye on available exits just as you would boarding an airplane. This is especially true at large events or obvious targets such as concerts or other political gatherings. Know your exits and be prepared to use them.

#2: Hide. If running to escape is not an option, then hide. Close and lock doors. Close windows and pull down blinds. Find a safe space like a closet or behind desks. Remember that if you do choose to hide, silence your cell phones and other electronic devices. Turn off the lights. Wait until receiving an “all clear” signal from first responders.

Hopefully you will never confront an active shooter. But if you do the basics of Run / Hide / Fight are an easy-to-remember course of action. Our international travel security experts can help your corporation do a complete audit of your employee security procedures – reach out for a consultation.